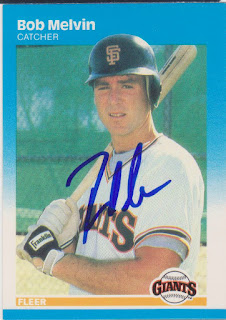 Here is the third and final card of Bob Melvin that I got signed at Spring Training in 2014. Bob and his A's were visiting the White Sox that day and I did pretty well with the A's coaches. I only got a few players to sign that day since the bigger named A's did not make the road trip. Along with Bob, I also got Chili Davis, Curt Young, Ariel Prieto, and Mike Gallego.

With this card, I have signed cards from Bob as a Giant, Oriole, and Tiger, the first three teams he played with. He also played for the Royals, Red Sox, Yankees, and Red Sox over the final three seasons of his career. Of those four teams, I don't think he has a Yankee or White Sox card and he only has a couple of Royal and Red Sox cards. When I went and saw the A's this past Spring Training, the three cards I took with me to get signed by him were all managers cards. I took one of each team he managed, the Mariners, Diamondbacks, and A's. I did not get him this year, so I still have some work to do to get a card signed for each team he was with.