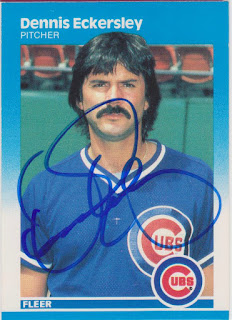 Here is the second of three cards that I got signed by Hall of Famer, Dennis Eckersley, at the College World Series in 2014. Those were the good days when they brought in former players to sign autographs. I got a lot of great signatures over the years while they were doing that. But, on the other hand, it is kind of nice that they don't do it anymore. The signings were kind of a distraction and made it hard to watch baseball. I would leave games early to get in line or hang out in line while the people I was with went into the game to get a seat. Now I just get to relax and watch competitive college baseball. And not get autographs from Hall of Famers.

My wife actually got this particular card signed for me. In fact, she got two signed. I gave her this one and an A's card and told her to pick one out. Being indecisive, she was unable to do that, so Eck went ahead and signed both for her. Since he signed two, he did not add the Hall of Fame inscription like he did with the '81 Donruss he signed for me.

Dennis pitched for the Cubs for two and a half seasons. He was dealt to Chicago for Bill Buckner during the '84 season. After starting the season 4-4 with the Red Sox, he went 10-8 with the Cubbies and posted a 3.03 ERA. The next season, he was 11-7 with a 3.08 ERA. In 1986, he went 6-11 with a 4.57 ERA. The Cubs traded him to Oakland right before the start of the '87 season for three minor leaguers that would never play in the Majors. Eckersley would never start a game again and would go on to punch his ticket to Cooperstown as the A's closer.