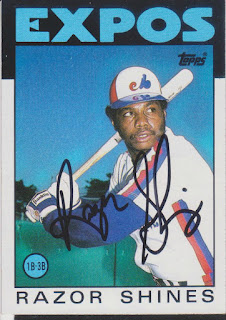 Here is the second card that Razor Shines signed for me at Spring Training in 2014. Razor was the manager of the Dodgers AA team in Chattanooga at the time and he signed my two cards after the minor league workouts. I posted the first card of Razor in 2014 and that card can be seen here.

Razor's time in the big leagues consisted of 68 games over four years with the Expos. Over that time, he got 81 at-bats and had 15 hits, good for a .185 average. All of his hits were singles except for a lone double. He never scored a run, but he did drive 5 in.

Razor even had the privilege of pitching one inning for Montreal in 1985. The team was getting shelled by the Phillies 11-0, so they threw Razor out to pitch the ninth. He ended up giving up a single to Steve Jeltz while getting the other three batters to ground out.
at 11:43 PM