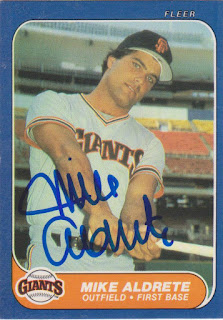 Here is the second card of Mike Aldrete that I have posted on here. But, unlike the first one, his '96 Leaf Signature Series card, I got this one in person. Mike is the hitting coach for the A's and he was nice enough to sign two cards for me at a Spring Training game this year.

At that game, there was a decent crowd 'graphing the A's at home. I was mixed in with that crowd on the outfield side of the dugout. I got a couple of players there, but there wasn't too much action. The game was about to get underway, so I went over to the home plate side of the dugout to see if I could get anyone over there. Mike was nearby and I asked him to sign. He came over right as the players were leaving the dugout for the National Anthem. Now he had to hurry, but he has a nice and slow deliberate signature. So, he only signed two of the three cards and ran up the stairs to get on the field. He ended up tripping on the top step and fell onto the field. At that point I cringed and felt bad for him because he was in such a hurry because of me. Lucky for him, his team had their backs to the dugout and no one noticed.

I stayed in that spot after the anthem and thanked him for signing and to make sure he was okay, which he was.
at 3:43 PM

Years ago, I worked with a lady who had a huge crush on Aldrete and Royce Clayton. Haven't thought about her until today.