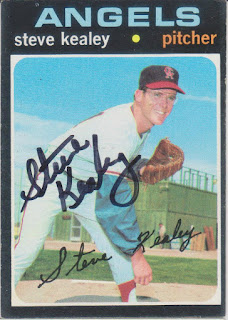 Here is the second of three cards that were signed for me by Steve Kealey at the Wichita card show last year. I posted the first card of Steve earlier this month and it can be seen here.

Steve pitched for the Angels for parts of three seasons, never appearing in more than seventeen games. Over 38 appearances for the Halos, Steve made just three starts and was 3-1 with a save and a 3.82 ERA. One of those starts happened to be a complete game shutout of the Orioles. In that contest, Steve scattered seven hits with two walks and two strikeouts. His two strikeout vivtims were Hall of Famers Brooks and Frank Robinson. That is not a bad night right there.

Steve was traded to the White Sox after the 1970 season.

Unfortunately, Steve had given up on the sports goggles by the time this picture was taken. Just see my previous post of him to see what I am talking about.
at 9:19 AM