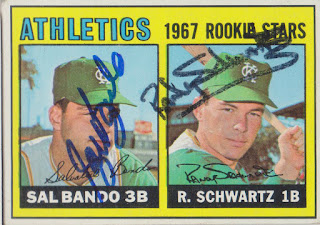 Here is a sweet looking card that I was able to get signed through the mail twice in a little over a month. I sent this card to Randy Schwartz first and I had it back in just over a week. I then sent it to Sal Bando, along with this card, four days later and I had it back from him three weeks later. The Schwartz signature came off a bit on the return trip from Bando, but what are you going to do?

This is the third card of Sal that I have posted on here. I posted the '81 Donruss card that I got back with this card in 2013. Before that, I had a Ted Williams card of Sal that was given to me by another blogger and that one can be seen here.

Randy's Major League career spanned all of 16 games with the A's in 1965 and '66. Over that time, he mainly pinch hit and got just 18 at-bats. He hit .167 with no extra base hits and 2 RBI with 7 strikeouts. He was just 22 when he played his last Major League game, but he called it quits after the next season at the tender age of 23.

It is hard to beat a dual signed card from the '60s. I have got a card coming up in a few days that is missing a signature on it. Stay tuned and if anyone has an address for the missing signature, you will have to let me know.
at 11:06 PM

Very cool. It's twice the accomplishment when you're able to get both athletes to sign a card.