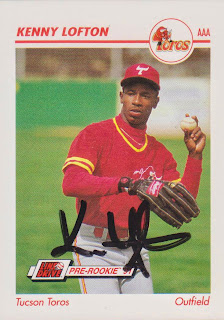 Here is a card that was signed by Kenny Lofton at this year's College World Series. Kenny was signing at the Capital One booth and I was able to get a handful of cards signed there.

It amazes me how different the autograph lines are at the College World Series Fanfest. The main one is the AT&T booth. They have been there since I started going in 2008 and they always have the big names, though one year they were kind of lacking. Sometimes, other booths will have signings and they are completely different from the AT&T booth. On a Saturday and Sunday, you can only get through the AT&T booth one time. But, if you go to another booth, you can go through the line multiple times. This year, John Kruk signed at the AT&T booth one day and the Buick booth the next. Even though John will talk to you like he has known you for years, you were only going to get through the AT&T booth once whereas I could have gone through the Buick booth multiple times if I still had more cards to get signed. Not that it mattered for Kruk as I saw him sign eight cards for one guy.

I guess all I am saying is that I was able to get about six cards signed by Kenny because I was able to go through his non-AT&T line multiple times. It helped that he didn't really interact with the fans, which is obviously not a good thing. When I had him sign this card, I said "I bet you didn't spend much time in Tuscon". He just chuckled to himself and then said "no".

Turns out he did play 130 games for the Toros. Considering he skipped AA, that was way more than I thought.

This is the last of the Line Drive cards. For some reason, I got a bunch of 1991 cards signed over the last couple of years. I've been posting '91s since the beginning of June and I still have nine more to go.
at 9:55 AM