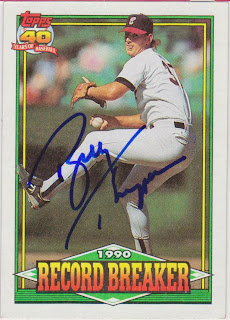 This year, I have really tried to focus on getting the subset cards signed. In the past, I have gotten some mid-'80s Topps All Star cards signed and a few Diamond Kings, but that is about it. This year, I have tried to mix it up a bit and have had a bit of success. It all started in April when I got Bobby Thigpen to sign this card and his 1990 Score Dream Team card. I have only been able to add one more record breaker card since then and it was on an '87 Topps card. It might be some time before that card gets posted on here.

I wanted to get this card signed for one reason and one reason only. Bobby Thigpen is defined by one thing and that is his single-season saves mark that stood for eighteen seasons. In 1990, Bobby saved 57 games for a White Sox team that was 94-68. In the days of just two divisions, that mark left the Sox nine games behind Oakland, though the record would have won the East. Nonetheless, Bobby finished the season 4-6 with a 1.83 ERA. His 57 saves broke the previous mark of 46, set by Dave Righetti in 1986.

Bobby's record was broken by Francisco Rodriguez in 2008 when he saved 62 games for the Angels.
at 10:45 PM