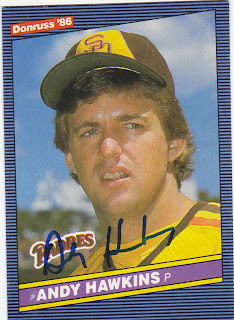 For some reason, when I was scanning cards for the blog, I completely overlooked this card. I thought that it had been in my collection for a while, but that was not the case. In fact, it is one of most recent acquisitions.

I got this card, and one other, signed by Andy outside of Kauffman Stadium before the Royals last home game this past season. I hadn't 'graphed outside the park all year because of the "No Autograph Zones" that had put up two years ago. But, since I had a less than stellar year 'graphing, I decided to give it a go and I am glad that I did.

At some point during the year, they did away with the "No Autograph Zones". It was still nearly impossible to get signatures from the Royals, but the open access to the visiting team made up for that. The Rangers were in town that day and I had my best day of 'graphing all season. I did not get too many cards signed by the players, but I made up for that by getting all of the coaches except for manager, Ron Washington. I think I ended up getting about two dozen cards signed that day, so I finished the year with a bang.

Five years ago, I posted a card of Andy that was given to me by Rod, of Padrographs. That card can be seen here.

Not bad. I remember Andy Hawkins briefly got credit for pitching a no-hitter and taking a loss in the game when he pitched for the Yankees, but it later got wiped out of the record books because he only pitched eight innings.