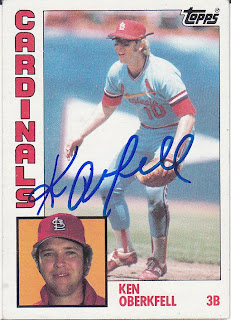 Here is a card that I got signed at a Wichita Wingnut game this past season. Actually, my girlfriend's boy got it signed after I gave him the card. He was excited as it was the oldest card that he had ever got signed. He got a few cards signed by the Wingnuts that day, too.

Then we got home and he sat all the cards by his TV. And they sat there. And sat there. Two months later, I walked into his room and this card had fallen on the ground. So, I picked it up and claimed it for myself. If he ever wants it back, it is his. But, that was three months ago that I snatched it up off the floor and he hasn't even noticed. The signed Wingnut cards are still by the TV.

Ken is the manager for the Lincoln Saltdogs and I came home with four cards signed by him that day. I had gotten Ken through the mail before on an '81 Donruss and that card can be seen here.
at 9:53 PM