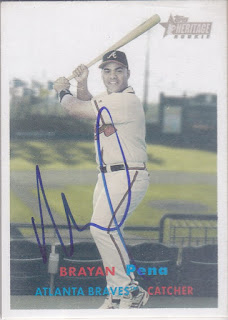 Here is the first card I have posted this year that I actually got signed this year. I got this card signed by the Royals parking lot after their home opener last month. Brayan had the day off that day, yet was still more than willing to sign autographs for the fans afterwards. He signed both cards that I had of him and the other one ended up being the second 2012 card that I got signed that day. After three Royals game thus far, I am still sitting at two 2012 signed cards. But still, that is better than last year as I didn't get a 2011 card signed until the end of June.

Topps must have been feeling pretty boring in 2006. This photo was taken at the same time as the one used in Brayan's Topps card. Heck, it might even be the exact same photo. Shame on you Topps. That card can be seen here and it was signed at the Royals home opener in 2009. Home openers must be a good time to get Brayan's signature.

Brayan is off to a fairly decent start this year. He is hitting .250, which is basically his career average, and nearly half of his hits are doubles.
at 7:56 AM