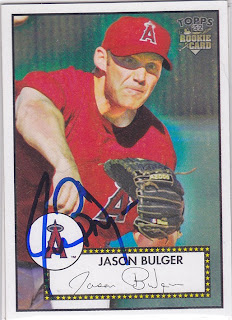 Here is a card that I got signed in Colorado Springs last summer while Jason was pitching for the Salt Lake Bees. My buddy Adam 'graphed the Bees side of the field before the game and he missed out on Jason. I got a little bit luckier after the game as I was able to get him heading back up the steps to the clubhouse. Since Jason is a reliever, there doesn't seem to be too many cards of him. I couldn't find one in my collection and had to resort to buying this card off of COMC. I was a little short on money that week and I only got one card of him instead of the usual three. But, at least you won't be seeing any repeat posts of Jason Bulger any time soon.

This season, Jason has moved on to the Yankees organization and is off to a rough start in AAA. Through 9.1 innings so far, he has given up 6 earned runs while walking 9 to just 6 strikeouts.
at 10:23 PM

Those cards really look great with autos on them.