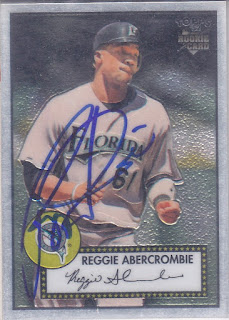 Here is a card of Reggie Abercrombie that I got signed at the 2010 American Association All Star Game in Wichita. Reggie was playing with the Sioux Falls Pheasants that season and he was an obvious choice for the All Star team as he finished the season hitting .328 with 22 home runs and 90 RBI in 88 games.

Prior to the All Star game that year, I had gotten the base version of this card signed by Reggie. Then I found this card for cheap on checkoutmycards.com and I decided to upgrade. Unfortunately, I'm not sure that I made the best choice there. In retrospect, I think I like the signed base cards better. There really is no point of chroming Heritage-style cards. But, oh well. I have one signed and I will learn from it.

Reggie played for the Pheasants last year and he is currently playing in Mexico right now. So far, he is hitting .347 with 11 home runs and 35 RBI through 38 games with the Pericos de Puebla. If he isn't picked up by a Major League team during the season, there is always the possibility that he could end up on an independent team as the Mexican League's season finishes up at the end of July.
at 4:39 PM

I remember when Reggie Abercrombie came up, he had one or two pretty good weeks, then he kinda disappeared. At least I know he's still playing somewhere now.

Those base cards are perfect for autos. That chrome one looks pretty good too, but I think the card stock on the base is made for ink.