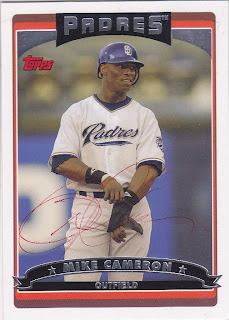 Here is a card of the veteran outfielder, Mike Cameron, that was given to me by Rod, from Padrographs, a few years back. Just like the last 2006 Topps card I posted, the signature on this card did not take stick too well. I doubt that this card was even prepped, yet the signatures from the two are pretty similar as they are hard to make out.

Personally, I can't believe that Mike Cameron is still playing. That is not a knock on him, it's just that he has been in the league for seventeen seasons. I mostly remember Mike from his early years with the White Sox and Mariners and, since he's been mostly in the National League since 2004, I have not seen him play in-person for some time. I think that is the main reason that I have a hard time believing his career is still going. Maybe if I saw him play every other year or something, I'd be less surprised to see that he has a minor league contract with the Marlins set up for next season.

I honestly have no clue what is up with Mike's signature. Even though it is hard to see, I still can't make out any letters besides what kind of looks like a "D".
at 1:15 PM

Nice. Pretty sure I have this card signed too.

I did not realize that Mike Cameron had been playing for 17 years... I feel old now. :)