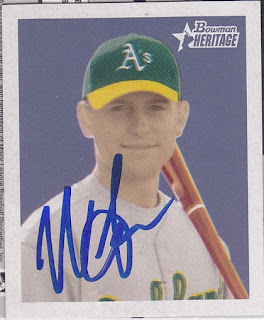 Here is a card that I got signed in Tulsa, Oklahoma in 2010. Matt was playing for the visiting Midland RockHounds and I was able to get this card signed before the game started.

I posted a card of Ryan Patterson yesterday and he had a similar story of playing three strait years of AA ball before ending up in a different type of AA ball- the American Association. To Matt's benefit, he is four years younger than Ryan. So, he could still develop a bit. But, he had better pick it up before the A's cut ties with him.

This card is one of the minis that were included in this set. The set is supposed to mimic the 1949 Bowman set and to truly do that, all of the cards would be this size. I doubt Topps would ever make an entire set of cards that are not the standard size ever again. But, I think that an entire set of this in minis would be fun.
at 12:06 PM