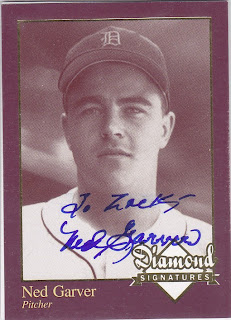 Almost one year ago, I posted a couple of vintage cards that Ned Garver signed for me through the mail (a '49 Bowman and a '52 Bowman). I bought the cards to get signed at the Kansas City A's reunion that the Kansas City T-Bones hosted the previous summer, but I missed Ned at the event. So, I sent the two cards to him and he returned both of them signed and he even included two more cards.

The two cards he sent me were two different Diamond Signatures cards. These are the first Diamond Signature cards that I have ever seen, but I had heard about the cards before. If I am not mistaken, these cards were made to be given away to older retired ballplayers so that they would have stuff to sign for people. How accurate that statement is is unclear, but it seems like a plausible one. If anyone else knows anything about these cards, feel free to chime in.

The only problem with this card is that Ned misspelled my name. My name is spelled with an "h", not a "k". But, that is only a minor problem. If I had sent one card and it came back with a misspelled personalization, I might be a little ticked off about it. But Ned signed both of my cards I sent him without a personalization and then included two more, that he didn't have to include, with the misspelled name. How can I get mad about that? He could have made the cards out to Tom, Dick, or Harry and I would have been just as happy to add them to my collection.

Good stuff man, it's always great to get extra signatures back from a TTM request. I don't know anything about these cards though, sorry I can't help.