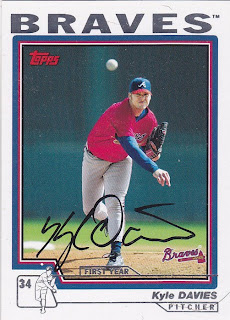 Here is the second former Brave/current Royal (as of now) that I have posted in the last two days. This one is of Kyle Davies and he doesn't appear to be wearing Adidas cleats. I got this card signed at a Royals game sometime in July of 2008. Kyle is a pretty good ballpark signer and I have had him sign on multiple occassions, so I don't really remember how or when I got this card signed. But, it might have been on the day that he and Brian Bannister were throwing curve balls to each other from 150 feet away.

This past season, Kyle pitched the most innings of his short career. He threw 183.2 innings while posting a record of 8-12 with a 5.34 ERA. He even recorded his first 100 strikeout season while finishing the year with 126.

The funny thing about Kyle and his tenure with the Royals is his Septembers. Kyle always has a mediocre (at best) season until September comes, and then he turns it up a notch. And every September (it wasn't really like that this past season, just the three before that), Kyle has Royals fans wondering if that is what Kyle is truly capable of. Then the next season starts and it is back to the regular Kyle Davies until September approaches. Then it repeats itself. Like I said, he didn't go through this routine this past season, so I think Royals fans have finally figured out what they have in Kyle Davies. And until the Royals highly touted farm system starts to produce Major League ready players, it is probably going to be more of the same for Kyle Davies and the Royals for 2011.
at 11:01 AM

I like Kyle's signature, it's not that legible but still nice.

This could be the year! Kyle Davies could be our #1 starter by default.

If not for Soria who the heck would be our AS?

That is a scary, yet likely, thought.

As for our All Star, it's gonna be Gordon. Do you not remember that he said he was going to have a breakout year in 2011?