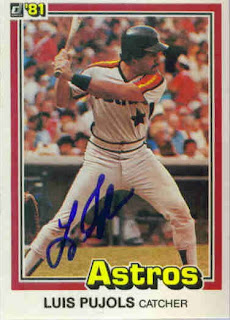 # 379 Luis Pujols
I got this card signed a little over a month ago in Tulsa, Oklahoma. Pujols is the manager of the Corpus Christi Hooks of the Texas League. I got to Driller Stadium early and the Hooks were taking infield practice. When they finished, Pujols walked by and I asked for his autograph. He said "No, I have to go change" (the Hooks were practicing in shorts and t-shirts). So I tried again after the game. At Tulsa, the teams have to leave the dugout to get to the clubhouse so I went and stood by the clubhouse entrance. When he came by, I asked him again and he started shaking his head "no", and looked up and saw it was me again, signed my one card and kept moving. It was kind of weird, like the Will Ferrell character in the Austin Powers movie (except I only had to ask twice).
Speaking of weird, I had a card of John Tamargo who was a coach for the Hooks. He walked by after the game and I asked him to sign and he said "sure". I handed him the card and he says "That's my dad" and hands it back to me. Oops.
at 3:35 PM