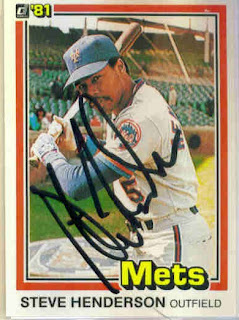 #157 Steve Henderson
This card also came out of the '81 Donruss box. I got it signed a few months ago at a Royals game. Henderson is the batting coach for the Tampa Bay Rays.
I'm pretty sure that when I was younger, I would get Steve Henderson and Dave Henderson mixed up. They both played together for the Mariners and A's. I realize this now because I had no idea who Steve Henderson was when I started looking for cards of the Rays coaches. It turns out that I had a bunch of him to choose from.
at 5:23 PM