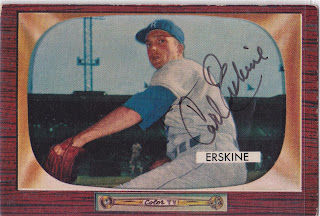 This is my newest autograph. I got this this past Sunday at Keyspan Park in Brooklyn, New York (home of the Brooklyn Cyclones, New York-Penn League). It was Carl Erskine day and they gave out Erskine bobbleheads and retired his number. He even played the national anthem on his harmonica prior to the game. He seemed like a real stand-up guy. He said a few words after being introduced and he really complemented the people of Brooklyn for accepting Jackie Robinson as one of their own.

After the game started, he sat outside the team store signing autographs. There was a huge line for the signing and a stipulation to be in that line. In order to get an autograph, you had to buy his book (it was basically a book signing, but if you had the book, you could get something else signed as well). So, I bought the book (it was $10 for a hard-cover; can't beat that) and went to my seat to watch the game and wait for the line to thin out. I went and checked on the line after the first- it hadn't moved. I checked back after the third- still extremely long. I checked back after the fifth- little progress. I checked back midway through the sixth- slight progress. By now, this 82 year old man had been signing for nearly two hours. I figured that he didn't have much left, so I had better stay in line. A few minutes later, a ballpark employee came to the back of the line to say that if you didn't have a book, you had to get out of line and that there were no more books left. So, I got lucky there by buying my book before the game started. So, I missed an inning and a half of the game, but I got my book and card signed. And it was a real nice and crisp signature, too (mine would be so sloppy after that much time). Plus, he signed for every single person that bought the book while most signings last for a set period of time.

By the way, I bought the card on ebay a week and a half before my trip for $8.50 (including shipping and handling). The card has seen better days, but it isn't often that you can get a 50+ year old card signed (there's no wrinkles, just battered edges). So, it basically cost me $18.50 for two autographs. Not bad.

Great story! I just read his book myself, it was a birthday present from my sister. He seems like a real sweet, introspective guy.

Wonderful story! Also, we like that you get the older cards signed. Nifty.

I know this is a really old post, but I just got his autograph today and wanted to see if you had it. Nearly 10 years later and the signature still looks the same.