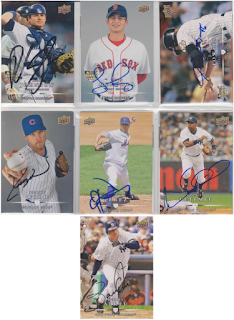 Rob Johnson- I didn't have much to choose from when I got Rob's autograph at a Rangers game in 2008. So, it was this card and his base Upper Deck card.

Luis Mendoza- Luis never pitched for the Red Sox. But, I guess this was the only photo Upper Deck had of him when they decided to make this card. Luis signed this one for me after the Royals home opener in 2012.

JR Towles- JR must have been a bigger prospect than Rob Johnson because I had a lot more options for cards with JR than I did with Rob. JR signed for me after a Round Rock Express game in 2008.

Kerry Wood- I got Kerry to sign at a Royals game in 2009 while he was with the Indians. Needless to say, but I was super-excited to get his autograph.

Oliver Perez- Speaking of the Indians, Ollie signed this card for me just last season when Cleveland came to The K. I saw the Indians play in Kansas City twice last year and Ollie signed both times. I took three cards to get signed the first time and he signed two of them. I got the third card signed when I saw them again a month later.

Wilson Betemit- I got Wilson to sign this card for me from the Royals parking lot in 2010.

Bobby Abreu- Bobby signed for me during batting practice at The K in 2009 while he was with the Angels.
at 10:01 AM