The Rest of 2008 Upper Deck Heroes 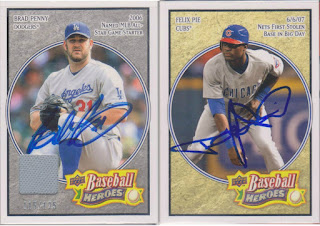 I guess this set was kind of an Upper Deck version of Topps Heritage. In the early '90s, Upper Deck had Heroes insert cards that focused on a different player each year and this set mimics those inserts. The 2008 version was a 200 card set that featured past and present stars along with some rookies. And the set had about a bazillion parallels of numbered variations. You could pull base cards numbered to 25, 49, 99, 149, 199, 249, 299, 399, and 499. It was a little ridiculous.

Brad Penny- I got this card signed by Brad at a Twins game in 2012 while he was with the Tigers. I missed out on getting a card signed by Brad while he was on a rehab assignment in Oklahoma City in 2008 because I did not know about the assignment. So, I was happy to make up for that at the Twins game and was pretty excited to get a relic signed by him. Five years later, I would add six more autographs from him to my collection when he played for the Kansas Stars.