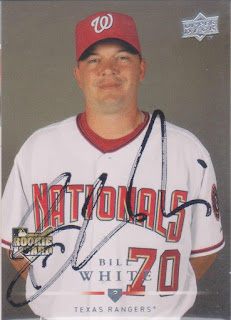 Here is a card that I got signed by one of the four Bill White's to play Major League Baseball. This Bill White is the only one to play the game in this century and he signed it for me at a Rangers game in 2008.

Bill pitched in just 17 Major League games, all in relief with the Rangers. Over those 17 outings, he was 2-0 with a 9.45 ERA in 13.1 innings of work. He did well in his initial call-up in 2007. That season, he got into 9 games and pitched 9.1 innings. While he walked 7 batters, he did record 9 strikeouts while collecting his pair of wins and posting a 4.82 ERA for the season. But, the wheels fell off in 2008 when he walked 11 batters and gave up 9 earned runs in just 4 innings of work. 2008 was Bill's last season in affiliated ball.

I find it odd that Upper Deck did not use a picture of Bill as a Ranger on this card. He never played in the Majors with Washington and he logged big league action with Texas in 2007. They used a picture of him as a Ranger in their Artifacts set that year, but not this set.

This is another classic example of why you need to prep glossy cards.
at 11:16 AM