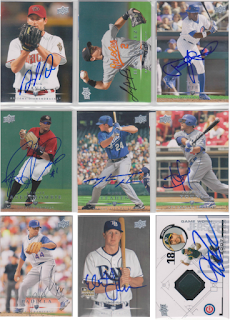 Here are the last of the 2008 Upper Deck base set.

Doug Davis- Doug signed this card for me at an Oklahoma Redhawks game in 2012. He was playing for the visiting Omaha Storm Chasers.

Luis Hernandez- Luis signed this card for me after batting practice at The K in 2009 during his one season with the Royals. He would later go on to play for the Wichita Wingnuts. But, by the time he was in Wichita, all of my cards of him were already signed.

Felix Pie- I was able to get Felix by the Orioles dugout on my last visit to Camden Yards in 2009.

Reggie Abercrombie- Though he never played for the Wingnuts, he played in the American Association long enough for me to get multiple autographs from him throughout the years. This one was obtained in 2016 while he was with Winnipeg. He was still with the club this past season at the age of thirty-eight.

Mark Teahen- Mark was always a great signer while with the Royals. This is one of the cards that he signed for me by the Royals parking lot in 2008.

Delwyn Young- I got Delwyn to sign two years ago while he was a member of the second, and last, incarnation of the Kansas Stars.

Vincente Padilla- Vincente signed for me at a Royals game in 2008. His Rangers were taking batting practice at the time.

Elliot Johnson- Elliot signed for me at a Scranton-Wilkes/Barre Yankees game in 2009. He was playing for the visiting Durham Bulls at the time.

Jason Kendall- Jason worked as a special adviser for the Royals for a few seasons and I was able to get this card signed outside The K in 2013. That day, I had just this one card of him and it was on the same page as two Emilio Bonifacio cards. When I gave him my book to sign, he said "dude, that's not me". When I pointed out his card, he was like "oh, I was going to say I'm not black".
at 4:45 PM