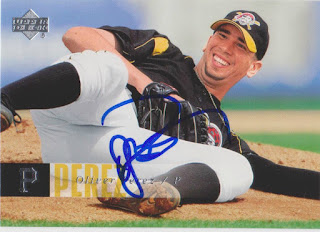 It has probably been over two years since I have posted a card of a current player. But, here is one now. To be honest, I had no idea that Ollie was even pitching this year until I was getting cards ready to see the Indians play in Kansas City. I had to do some digging to find three cards of him, but I found them. Ollie signed two of them at the late August game I attended, but not this one. I then saw the Indians again in Kansas City a month later and was able to get this one signed.

Ollie had an amazing season this year with the Tribe. The LOOGY got into 51 games and pitched 32.1 innings with a 1.39 ERA and 43 strikeouts. Those are some good numbers for a 38 year-old reliever that does not throw gas.

Just like the last two guys I posted on here, my three cards of Ollie all featured him with a different team. This one showcases his time in Pittsburgh, which lasted about three seasons. Over that time, he was 21-28 with a 4.59 ERA.