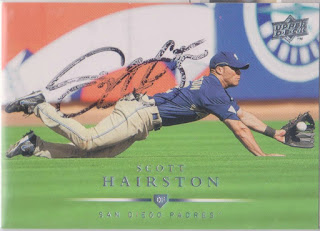 Here is a card that was given to me by Rod, from Padrographs, many years ago. If I remember correctly, it was in his initial package he sent me that included over 125 signed Padre cards. That has been over ten years ago now. It is truly hard to believe that I have been at this blog for that long.

As for Scott, he had a long eleven year Major League career. During that time, he played with the Diamondbacks, Padres, A's, Mets, Cubs, and Nationals. He was a .242 career hitter that knocked 106 home runs and drove in 313 RBI. His best season was with the Mets in 2012. That year, he played in a career high 134 games and responded by batting .263 with 20 home runs and 57 RBI. Despite the long career, Scott never appeared in the postseason.

It looks like Rod and I were in the same boat in 2008 and getting glossy cards signed without prepping them first.
at 10:43 AM