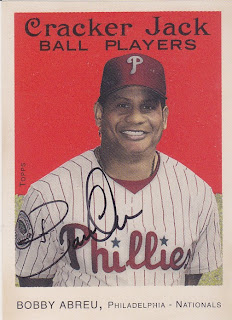 Here is a card that I got signed in Kansas City in 2009. The Angels were in town that day and I got to the game early enough to get my spot by the dugout. My spot is the home plate side of the vistors dugout where there is an open space in the dugout where tarps are stored. It's a great place to get autographs (especially cards) and that is where I get sevety-five percent of my cards signed inside of Kauffman Stadium.

On the day Bobby signed my card, he was signing baseballs on the field. He was right in front of me, but he was fifteen feet away. I use a book to get my cards signed and one thing I do not do with it is throw it. The last thing I want is to throw it and have cards flying out and then have a security guard trying to pick them up for me off of the concrete.

So, I didn't think I was going to get anything signed by Bobby that day and then I got lucky. Someone threw him a ball to sign and he dropped it right down by my spot. Then he had to go down in the dugout to retrieve the ball and he continued to sign a few more autographs at my spot. He signed two out of three cards for me.

I was pretty happy to get this card signed as it is my only signed Cracker Jack card that I own. I was in basic training when these cards came out, but I was lucky enough that my dad had found some at Wal-Mart and he picked me up a few packs. I think that these are some great looking cards and I was gratefull to finally add a signed one to my collection.
at 4:02 PM