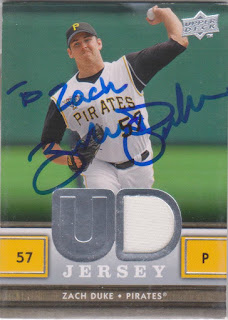 My name is Zach and, whenever I run into a Zach (or Zack or Zac) that plays ball, I like to get a card personalized to me. It may be a little weird and a bit creepy, but I call it my "To Zach, From Zach" collection. This is the first card that I have posted from this collection.

I got this card signed by Zach at a Royals game in 2015. He was playing for the White Sox at the time. It was a Sunday day game in early September and it was super hot. The 'graphing sucked as all I got was Duke. But, he did sign all three of my cards in addition to personalizing this one. Mike Sweeney was at the game for Sweeney bobbleheads. But, by the time I realized he was there and signing at the Hall of Fame, they had closed the line off.

To make matters worse, my wife was five months pregnant and battling a terrible migraine. The sun and heat weren't helping her out at all, so we left the game about the time it started. It was not the way I envisioned the day going, but I was not about to jeopardize my wife's and unborn son's health for a ballgame.

As for Zach Duke, he pitched for the Reds for half of the 2019 season before getting released in July after going 3-1 with a 5.01 ERA. It is quite possible that his career is over and, if it is, he lasted fifteen seasons and pitched for the Pirates, Diamondbacks, Nationals, Reds, Brewers, White Sox, Cardinals, Twins, and Mariners. He has a 69-91 record with 4 saves and a 4.31 ERA. In 2009, he represented the Pirates on the National League All Star roster.
at 9:31 AM