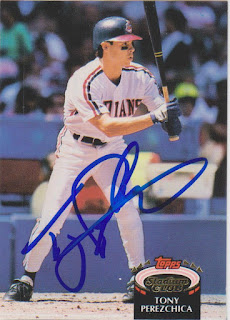 Here is the second and final card that I got signed by Tony Perezchica this past season. Tony is the third base coach for the Diamondbacks and he stopped briefly to sign after getting off the team bus. I posted the other card in November and it can be seen here.

I find it amusing that I have four Major League cards of Ozzie Canseco, who played in 24 Major League games. Tony, on the other hand, played in almost three times as many games as Ozzie. They have about the same number of base cards made, but this is the only non-minor league card of Tony that I have.