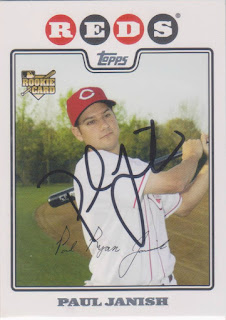 Here is a card that I got signed by Paul Janish at a Royals game in 2009. The Reds were in town and I stopped at the game on the way up to Omaha for the College World Series. It was a heck of a game as I saw Luke Hochevar pitch a complete game on just 80 pitches. It was unreal. While Hochevar only allowed three hits, he wasn't dominating as he only struck out three batters. He was just pitching to contact and the Reds were up there hacking, with only seven of the thirty-one batters seeing four or more pitches. As for Paul, he signed this one card for me during batting practice and did not get in the game.

Paul played in the Majors for parts of nine seasons with the Reds, Braves, and Orioles. He was a .212 hitter that had 7 homers and 87 RBI over his 473 big league games. His best season was with the Reds in 2010. That year, he played in a career-high 114 games and he hit .260 with 5 home runs and 25 RBI. Paul last appeared in a Major League game in 2017 and appears to have called it a career since then.

Speaking of the College World Series, it wrapped up last night with another Vanderbilt championship. I did not attend the event for the first time since 2006, so that was kind of strange. I also did not hold the College World Series Contest for the first time since 2008. I am hoping to get back on track in Omaha next summer, though I probably won't hold the contest.

You gotta get the contest going again. The cws isn't as exciting without it. I only watched about half a game of it this year and couldn't even tell you which teams were in it. Hope your doing well man, hit me up the next time you're in town and we can go grab a drink.

Sounds good. I am pretty sure I still owe you a drink for winning the contest last year.