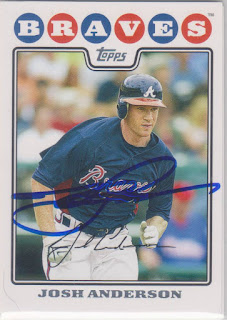 Here is the first of three cards that I got signed by Josh Anderson in 2009. Josh was with the Royals at the time and I was able to snag him in Minnesota at the final regular season series at the Metrodome.

Josh appeared in 179 Major League games with four teams over a three year stretch. He saw action with the Astros, Braves, Tigers, and Royals. Over those 179 games, he managed to hit .272 with 4 home runs and 47 RBI. After his first two big league seasons, Josh was a .315 hitter. Then, after playing in 118 games in 2009 and hitting .240, his average dipped down to that respectable .272 lifetime average.

On a totally unrelated note, I went up to Omaha this weekend. I was hoping to catch an "if necessary" College World Series game, but the game wasn't necessary. I instead took in an Omaha Storm Chasers game, where I have had great 'graphing success in the past. Well, that success came to an end Saturday night. I came home from that game with four cards signed from two different guys. I wasn't very thrilled with those results.

The main reason for the low numbers was because it was a bobblehead night and quite a few fans showed up super early for that. When we arrived at the park fifteen minutes before the gates opened, there were lines halfway through the parking lot to get in and we didn't even have tickets yet. By the time we got inside, we were about forty people away from the clubhouse. Most of the guys that did sign only signed a few and it was for the first people they came across. I was hoping to get Keston Huira there, but he quit signing after the first ten people.

When it was all said and done, I got one card signed by Jake Hager and three from Brett Phillips, which probably gives me eight of him because he is a signing machine. My little guy got a card signed by Brett, too, so I am glad that he didn't come home empty handed.
at 8:35 AM