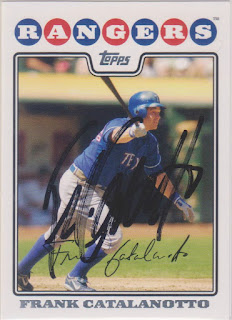 Here is a card that I got signed at a Royals game in 2008. Frank was playing for the Rangers at the time and was nice enough to come over and sign one of my cards during batting practice.

Frank played in the Major Leagues for thirteen seasons and saw time with the Tigers, Rangers, Blue Jays, Brewers, and Mets. Over that time, he was a .291 hitter that had 84 home runs and 457 RBI. He had double digit home run seasons five times, but never hit more than 13 homers in a season.

Frank had many good years in the Majors and it is hard to look at one and say that was his best season. But, if I had to pick one, I would go with 2001 with the Rangers. That was the first season that he had over 400 at-bats and he responded by hitting an impressive .330 with 31 doubles and 11 home runs. That .330 average ranked him fifth in the American League that year.