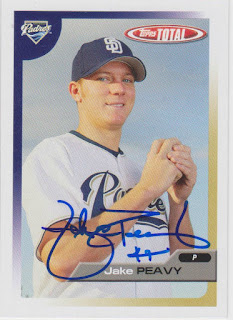 Here is the first card of Jake Peavy that I have posted in eight years. That one was given to me by Rod, from Padrographs. This one, on the other hand, was obtained in-person last summer while Jake was playing for the Kansas Stars.

I had three cards for Jake to sign, but he was strictly a one-per guy. Luckily, I gave some cards to my dad and he was able to get a second card signed for me. That one is from a 2014 set, so it will be another eight years before I get that card posted. Who am I kidding? At my rate, it will be closer to eighteen years.

When I last posted a card of Jake, he was still an active player. That is not the case anymore as he last played in 2016. He had a rough go at life since that 2016 season which included a divorce and his financial adviser screwing him out of millions of dollars he had saved up for retirement. He was trying to make a comeback this season, but I had not heard anything about that since Spring Training.