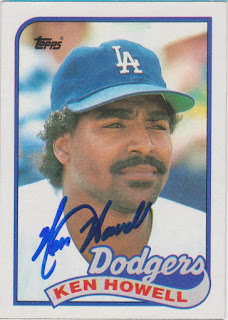 Here is the second of three cards of Ken Howell that I got signed at a Royals game in 2014. Ken was the assistant pitching coach for the Dodgers at the time and he signed the cards for me from the bullpen. I posted the first card three years ago and it can be seen here.

Ken was with the Dodgers in 1988 when they last played in the World Series, but he was not a participant. He spent a majority of the season pitching for the Dodgers AAA team and only got into four games with the big league club- one in July and three in September. On top of that, he did not do well in those four games, going 0-1 with a 6.39 ERA. He got knocked around a bit on the one start he made, but actually did okay in the three relief outings. But, those three outings were not enough and Ken was left off of the Dodgers postseason rosters.