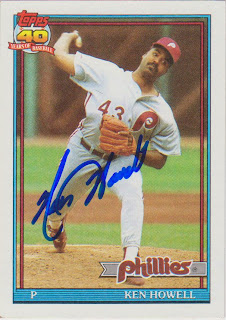 Here is the first of three cards that I got signed by Ken Howell last month at a Royals game. Ken is the assistant pitching coach for the Dodgers and I was able to get him to sign the cards for me from the visiting team bullpen. The other two cards were older ones, so it will be some time before they get posted on here.

I always think of Ken as a Dodger since that was his original team. He spent his first five seasons there before moving on to Philadelphia. As a Dodger, he pitched out of the bullpen in all but four games. But, once he became a Phillie, he was turned into a starter.

Ken pitched in six AAA games in 1991 before missing all of the 1992 season. He then had a few appearances in the low minors in '93 and '94 before calling it quits.

Ken has one of the nicest looking signatures that I have acquired this year.
at 6:19 PM