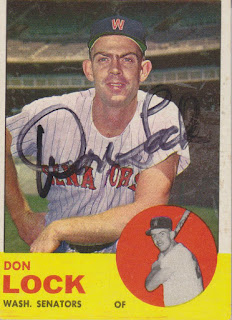 Here is a card that I got signed at a card show almost three years ago. Rock's Dugout, the oldest card shop in Kansas, hosts a bi-monthly card show by his shop in Wichita. Most of the vintage cards I get signed through the mail are bought at his show. Occasionally, Rock will bring in a local former athlete to sign and that is how I got this card signed.

I did not have a card of Don prior to the show, so I made sure to get there early enough to scrounge a few up from the dealers. I was lucky enough to find three that day and this one happens to be the third one that Don signed. He also signed a couple of 8x10s for us. As soon as he got done signing the first two cards and the 8x10s, the Sharpie Don was using crapped out on him. The signature on this card is the result from that crapped out Sharpie.

It's okay, though. This card still looks better than it did before it was signed. It just so happens that the other two cards he signed for me look a little better. Maybe if I can get myself in gear, I will post those two cards before the end of the year.
at 1:44 PM