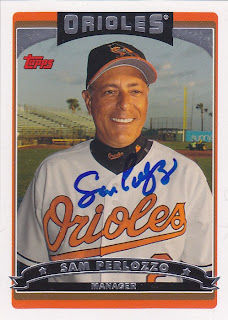 Here is a card that I got signed at a Royals game in 2008. I was 'graphing the Royals parking lot that day when a group of Mariners coaches pulled up in a rental car. Sam was the only coach of the four that I recognised out of uniform and I thought that it was pretty cool that he actually came over and signed when I asked him to. That was the only non-Royal autograph that I got that day in the lot. Come to think of it, I'm pretty sure that is the only non-Royal autograph that I have ever got from that lot.

At the time, Sam was the Mariners third base coach. He held that gig for two years before moving on to the Phillies organization in 2009. With the Phillies, he has coached third and first and he is currently listed as their first base coach.

Sam played in the Majors for twelve games. He got into ten of those games with the Twins in 1977 and he hit .292 in limited action. He played the last two games two years later when he went hitless in two at-bats with the Padres.

It appears that Sam has two cards from his playing days. But, both of them are Topps rookie stars cards that feature Sam with two or three other guys. That could explain why he has such a small signature- he is used to signing a small area.
at 10:28 PM

Cool story about Sam. He always seemed like a nice guy who might have been a in a little over his head as a manager.

Nice autograph from a former Mets third base coach.

You content is really worth able Thanks for update keep trying to update. By Business card printing

Hey Z, you doing OK!? Haven't seen you on here in awhile.