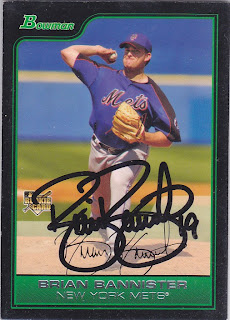 Here is a card that I got signed by the Royals parking lot back in the summer of 2008. Renovations were in high gear that summer and many areas were blocked off for construction. Because of that, they had to move the players parking lot a bit. When they moved the lot, they also made another change- they fenced in the lot for the first time. While the fence was a minor inconvenience, it was short enough to easily hand stuff over to get signed.

That players lot was just a temporary lot and it moved to its current location the following year. 2008 was the first time I had 'graphed outside of The K and, to date, it was the best year. It has been a downhill slide since then, kind of like Brian's career.

But, I will say this about Brian. First, he has one of the best and most consistent signatures I have ever seen. This was one of the first cards I ever got signed by him. When I gave him my book with three cards to sign, he signed the first one so slowly that I thought there was no way he was signing more than one. But, he did sign all three and it took him about ten seconds a card to sign. He is one of the few players I have met that take their time with each and every signature.

Also, Brian was the best signer on the Royals when he was there. He was always signing for everybody and he only turned me down once. When he did turn me down, he made sure to point out that he was late for a meeting and he would get me inside the park. And he did exactly that.

I wish things would have worked out better with Brian and the Royals, but that is just the way it goes. Nevertheless, Brian is a class act and I wish him the best.

I know he pitched in Japan last season, but he left his team after the earthquake/tsunami and did not pitch the rest of the season. I am assuming that he is a free agent this year, so it will be interesting to see where he ends up.
at 5:55 PM

It must run in the family because his dad always took his time with his signature and it was very legible.

That is a great signature. One of the best I have seen with a current player.

Tommy Hunter takes a good bit of time with his signature and is the only modern Oriole who i can really say that about.

Funny you should mention that, Mike. I told Brian how much I appreciate the effort he puts into his signature and he told me that he got it from his dad.

Ryan- Now that Brian is gone, I can't think of any Royal that signed like Brian did. Many of the young kids sign a lot, but their signatures are just scribbles.