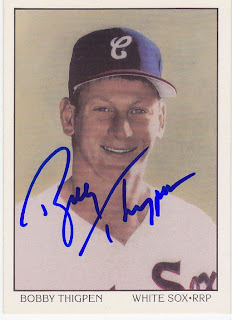 The College World Series tournament field was announced today. But, I had to work and then take in a Wingnuts game, so I haven't gotten around to posting my annual contest yet. So, here is a card of Bobby Thigpen until I can get the contest post up later today.

I posted a couple of Thigpen cards earlier this year that were signed at Spring Training last year. You can see his '87 Fleer here and his '88 Donruss here. This next round of Thigpen cards were all obtained at a Royals game this season.

Bobby is the bullpen coach for the White Sox and I got three cards signed by him by the Sox bullpen prior to the first Royals game I attended this year. It was a pretty slow day of 'graphing for me as all I got were Bobby and Mark Salas. This year continued last years trend of pitchers not working out on Sunday and me being relegated to bullpen mop-up duty.

That all changed at the last game I went to as the Orioles actually took batting practice on Sunday, though all I took were cards of pitchers. Tommy Hunter and Miguel Gonzalez were nice enough to sign and Chris Tillman did not sign, but he gave my kid a ball. So, it turned out alright, especially since I did not have any cards of the O's bullpen or pitching coaches.

This card is from Score's Dream Team subset. I love how it lists Bobby's position as RRP. I'm glad that did not stick. The write-up on the back of the card even refers to long-time White Sox organist, Nancy Faust. It says "when a team finishes last, as the Sox did, they could have just as well done it with Nancy Faust". It then goes on to mention that Bobby finished second in the league in saves and finishes with "Bobby's superb work in relief for the '89 White Sox was a waste in excellence". Ouch. That was written by Alan Solomon of the Chicago Tribune. According to the Tribune's site, Alan is now a travel writer after being thrown out of the sports department in 1994.

Here is a picture of Nancy from my lone trip to a Sox game in 2007. 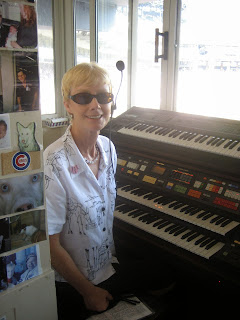 Stay tuned. The CWS contest is coming up shortly!
at 1:18 AM