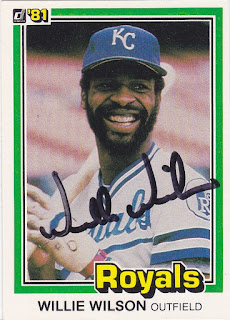 This is a card that I had been trying to get signed for several years without any luck. I originally took it to a Royals old-timers game to get signed and did not succeed. I then took it to a Kansas City T Bones game when Willie was the starting centerfielder, but was unable to get it signed before the game. There was a post game autograph session, but I did not feel like spending the ten bucks to get the card signed.

I finally got it signed this past winter when the Royals Caravan made an appearance at Wal-Mart in my hometown. My town had been dropped of the Caravan route for the previous three years, so it was nice see them stop there again. It was even nicer that they had a decent line-up of guys signing at the event. Willie was obviously there, along with Everett Teaford, Aaron Crow, and Eric Hosmer. The signing was held during the day on a Thursday, so there wasn't a huge crowd. That was great as I was able to go through the line twice.