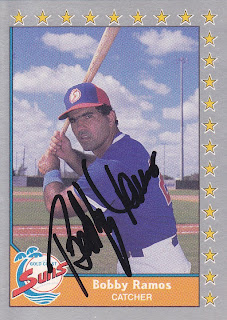 Here is another card that I got signed in Baltimore a couple of weeks ago. Bobby is the Rays bullpen coach and he was the only Rays coach to sign for me that day whose autograph I did not already have. I got this card and one other card signed by him.

Bobby's big league career spanned a few years, but didn't really amount to much. He spent some time in the Majors for parts of six seasons with the Expos and Yankees. Unfortunately, the most games that he ever got into in one season was 27. For his career, he only played in 103 games. His last season as a Major Leaguer was 1984. But, he continued to play in AAA for four more years before calling it quits.
at 4:10 PM