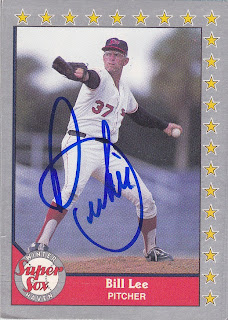 I got this card signed through the mail. I got it back last Saturday after sending it off to Bill in the beginning of April. I had pretty much given up on it until it arrived in my mailbox.

I had sent three cards to get signed- this card, a '75 Topps, and an '81 Donruss. Unfortunately, the '81 Donruss never made it home. The other two cards were signed, but there was no sign of the Donruss card. It was cool to get those two cards back, but I think that I was more disappointed than happy because of the loss of the Donruss card (I probably would have been just as disappointed if this card hadn't come back since it would have broke up my set). Now I have to acquire another card to send out to him again. Maybe he just doesn't like signing his Expos cards.

On a brighter note, I went to the Royals last home game of the year today. It was great weather, a great crowd, and a Royals win. I couldn't have asked for anything more. Zack Grienke looked great and I got to see the Royals win for only the second time this year. Nearly 30,000 people showed up to see a crappy Royals team and Grienke. I've been to many final home games this decade, but I had never seen anything close to 30,000 people at one. So, that was good to see. It would have been a great way to end my year, but I'll be seeing the Royals two more times in Minnesota next weekend. Hopefully they can repeat what they did today.
at 8:38 PM