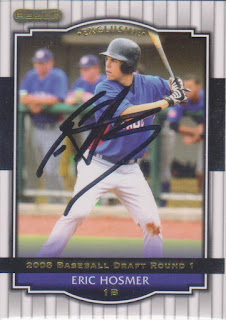 Does anyone else remember this set? If it wasn't for the cards from it that I bought to get signed, I certainly would not. I never saw any packs of this stuff and have no idea how it was distributed. Since I have none, I am sure it wasn't something you could pick up at your local big box store. A quick peek at COMC makes it look like 2008 was the only year that the company did a mass released baseball set.

Here is the card of Eric Hosmer that I got signed in Burlington, Iowa in 2009. I was on my way to the Future's Game in St. Louis and decided to veer off to the north to take in a Burlington Bees game. The Bees were a Royals affiliate at the time and play in a beautiful little ballpark that was built in 1947.

That was the first time I ever got to see Hoz play, but it certainly was not the last time. I believe I saw him play one more minor league game after that before having the pleasure to watch him play 46 times as a member of the Royals. He was a key cog during the Royals second championship in 2015 and scored the tying run in game five of the Series that sent the game into extra innings. The Royals went on to win the Series in the 12th inning and Hoz's mad dash to home in the top of the ninth is still highly regarded in Royals lore. It is simply referred to as "The Slide".

Nowadays, Eric is out west playing for the Padres. Because of that, I may never seem him play again. For whatever reason, the Padres are the franchise that I have seen play the least amount of times. In my twenty-five years of attending Major League games, I have seen the Padres play twice. I saw them play in Denver in 1996 and in San Diego in 2008. They are one of just two teams (the Phillies being the other) that I have never seen play in Kansas City.
at 11:36 AM