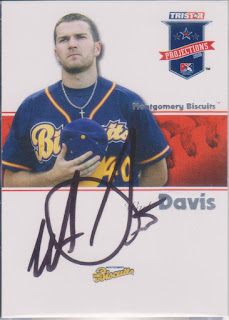 Here is a card that I got signed at Royals Fanfest in 2013. At the time, Wade had just come over from the Rays. He was basically a throw-in in the Wil Myers/James Shields trade. There wasn't any real expectations for him except to help fill in the rotation. Absolutely no one envisioned that he was going to be a dominant reliever that would anchor a bullpen that would lead the Royals to back-to-back World Series appearances, let alone revolutionize how a bullpen could be used.

While with the Rays, Wade was a starter for his first two plus years before moving to the bullpen for his last season in Tampa Bay. As a starter, he was 25-22 with a 4.22 ERA and 254 strikeouts in 388.1 innings of work. Then, out of the 'pen, he was 3-0 with a 2.43 ERA and 87 K's in just 70.1 innings of work. Why the Royals would want to move him back to the rotation is beyond me. They probably just lacked rotation depth and needed a starter.

The Royals kept him in the bullpen the following year and the rest is history. For three seasons of relief work out of the Kansas City 'pen, Wade would go 19-4 with 47 saves, a 1.18 ERA, and 234 strikeouts in 182.2 innings. On top of that, he only allowed three home runs. And, as if you thought those numbers were lights out, he was even better in the postseason.

During the Royals two postseason runs, Wade was 2-0 with 4 saves with a 0.36 ERA and 38 strikeouts in 25 innings of work. Those numbers just look unreal.

The Royals traded Wade to the Cubs before the 2017 season and he signed with the Rockies last year where he would lead the National League in saves. But, he is having a rough go of it this year and is not the team's closer and is sporting a non Wade Davis-like ERA of 7.43.