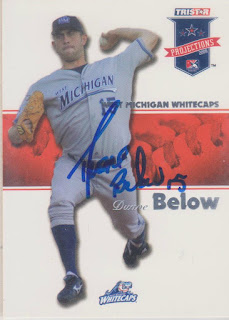 First off, I fianlly made it back home after a little ballpark trip with the family. I have always wanted to take my dad to Wrigley Field and I finally had that chance last week. Chicago is about twelve hours away from here. So, with my three year old, I had to break the drive down in segments so we would all survive. Because of that, the five day trip took us to four ballparks. Besides Wrigley, we took in Busch Stadium, Bosse Field in Evansville, Indiana and Impact Field in Rosemont, Illinois. Personally, I had a blast. I am not too sure about my fourteen year old and wife, though. But, I am glad that they came along, nonetheless.

As far as this card, I got it signed at a Royals game in 2011. Duane was with the Tigers at the time and he signed two of these cards for me before the game started. I still have the other one he signed, so it is available to anybody that needs it.

Duane pitched in the Majors for parts of three seasons with the Tigers and Marlins. In that time, he pitched in 44 games (3 starts) and was 2-4 with a 4.27 ERA. He last pitched in the Majors in 2013 and has pitched in Korea and Japan since then. He is still playing now as he is working on stepping off of the rubber to throw to first in the Atlantic League.
at 10:48 AM