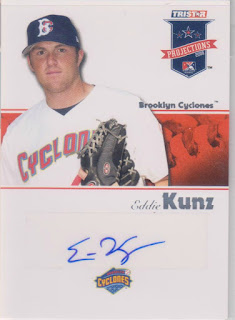 In 2009, I went down to Houston for my cousin's wedding. While it was before the baseball season officially started, it was really good timing because the Astros were in town. They had wrapped up their Grapefruit League schedule and went home to Minute Maid Park for two exhibition games before the season got underway. During one of those games, Minute Maid hosted Astros Fanfest.

Strosfest was way different than Royals Fanfest. The biggest difference was that it was held during a ballgame. Because of that, no current Astros players participated. So, it was only alumni that signed. Some signed for free and some costs money. It was a rather busy afternoon with running around getting alumni autographs, a baseball game in the background, and a card show at the event. But, it was a great time and I got a lot of cool autographs from the alumni signings, including a couple of '81 Donruss cards. Plus, I pulled this card out of a pack from the card show.

Eddie was drafted by the Mets at the end of the first round of the 2007 draft. In 2008, he was making his Major League debut with them and would appear in four games and post a 13.50 ERA with a strikeout in 2.2 relief innings. Sadly, that would be the only time he pitched in the Majors.

Usually, when a players gets to the top that quick, they tend to stick around a bit. But, not Eddie. He spent 2009 in AAA before spending all of 2010 in AA. Prior to the 2011 season, he was dealt to the Padres and would repeat AA. 2012 was split between AA and AAA and Eddie called it quits after that season.

In case you are wondering, Eddie's one Major League strikeout was Marlins pitcher, Josh Johnson.
at 1:36 PM