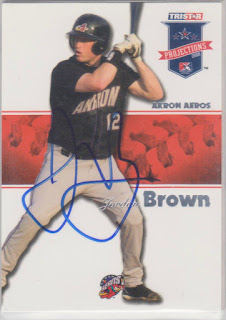 Here is a card that I got signed at an Iowa Cubs game in 2011. Jordan was playing for the visiting Nashville Sounds at the time and was nice enough to sign three cards for me that day.

Jordan spent parts of two seasons in the Majors. He saw time with the Indians in 2010 and the Marlins in 2013. During those two seasons, he hit .225 with 7 RBI. Though he never hit a dinger at the Major League level, he did manage to swat 8 doubles and those made up a quarter of his hits. Jordan last played professionally in 2014.

For whatever reason, it seems like the Nashville Sounds are the minor league team that I have seen play the most, with the exception of Omaha. And I have never been to a game in Nashville. That will all change next year when the Baby Cakes move to Wichita. They should pass Omaha and Nashville unless the 'graphing their is just terrible. They are going to have netting from foul pole to foul pole, so who knows.

Speaking of Wichita baseball, they are slowly releasing seven finalists for the team name. The first one came out last week and it is the Wichita River Riders. While I do not hate the name, AAA baseball already has the Rail Riders and I don't think it needs another name that sounds so similar. To make matter worse, the River Riders have an awful logo that looks more like a logo for the River Festival than a professional sports franchise.

As for the Akron Aeros, whom Jordan is pictured with here, they are still the AA affiliate for the Indians. But, they changed their name and are now the Rubberducks. In case you didn't know that Rubberducks was one word, now you know.
at 10:11 AM