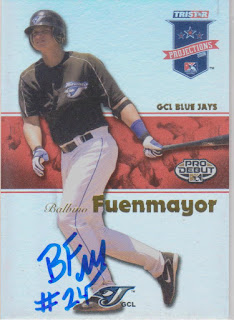 Here is a card that I got signed at a Burlington Bees game in 2009. Actually, my dad got this card signed for me. The Bees were a Royals affiliate at the time, so I was on that side of the field getting Bees autos. I sent my dad over to 'graph the visiting Lansing Lugnuts side for me and he was able to get two cards signed for me. This is obviously one of those cards.

If you have never heard of Balbino, you are missing out on an interesting story. The Blue Jays signed Balbino out of Venezuela in 2006 and he spent seven seasons in the Jays system. The only problem was that he never made it out of A ball. In fact, he spent parts of four seasons with Lansing. So, the Jays let him go and it was off to the independent leagues. Over a two year stretch, he played in the Can-Am League, American Association, and the Frontier League.

He did good enough there to get a look by the Royals in 2015 and made their AA team out of Spring Training. He then proceeded to tear up the Texas League and found himself playing for the World Team at the Future's Game during the All Star break. For that season, that was split between AA and AAA, Balbino ended up batting .341 with 17 home runs. He would then spend all of 2016 in Omaha where he hit .291 with just 6 homers.

The Royals released him after that season and he hasn't played affiliated ball since. But, he is still playing and is tearing up the Mexican League this summer. Through 99 games, Balbino is batting .329 with a career high 30 home runs. Being just twenty-nine years old, there still may be hope for him to return to affiliated ball.
at 9:12 AM