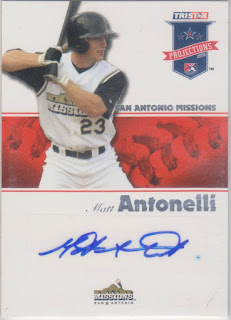 Here is a card that I purchased when making a COMC order in 2012. For the longest time, I always felt like I needed to buy an autograph whenever I made a purchase on there. Because of that, I bought a lot of Bowman and Topps Pro Debut autos that I really didn't need. So, I have discontinued that practice. But, I will occasionally buy an auto with my purchase. Those, though, tend to be of guys I collect in some way, shape, or form. On the bright side, this card only set me back 95 cents. It's listed as $2.43 right now.

Matt had the privilege of playing 23 Major League games with the Padres in 2008. During that time, he hit just .193 with a homer and 3 RBI. His one dinger was a two-run shot off of Jason Hirsch at Coors Field.

Despite never making it back to the Major Leagues, Matt continued to play ball up into the 2013 season.

This card features Matt with the San Antonio Missions, who were the Padres AA team at the time. The Missions are still around and they got bumped up to AAA this season, though they still play in an AA ballpark. The Missions are now the Brewers top affiliate.

For some reason, Tristar did not list a position on cards for this set.
at 9:03 AM