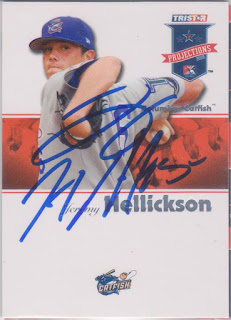 Here is a card that I got signed at a Royals game in 2010 while Jeremy was a rookie with the Rays. It was a Sunday day game, so I was trying to get pitchers down the line in the outfield. When Jeremy came over to sign, I handed him my card book and Sharpie. I always try to take the cap off of the Sharpie just to make it easier for the players. On that day, Jeremy didn't realize that I took the cap off for him and he tried to take it off himself. Instead, all he did was get blue Sharpie all over his hand. When he realized what he had done, he just looked up at me and gave me a dirty look. It was quite funny.

Jeremy pitched for the Rays for five seasons, going 40-36 with a 3.78 ERA. The Rays traded him to the Diamondbacks after the 2014 season and he has bounced around a bit since then. Besides playing for the D-Backs, he has seen time with the Phillies, Orioles, and Nationals, his current team. But, this season has basically been a wash for him as he has been on the injured list since late May (I think that is the first time Injured List has been used on here). For his career to date, Jeremy is 76-75 with a 4.13 ERA. He was the 2011 American League Rookie of the Year and he won a Gold Glove in 2012.

Jeremy is pictured with the Columbus Catfish on this card. Unfortunately, the Catfish no longer exist. They left Georgia after the 2008 season and became the Bowling Green Hot Rods.